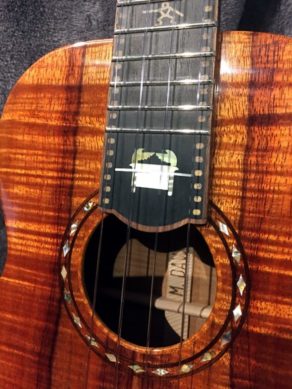 A friend who majored in film studies and history asked for an uke that referenced his favorite movie – Raiders of the Lost Ark and his love of Hawaiian hieroglyphs. So, we made this tenor uke out of AAAA curly Hawaiian koa with an ebony fret-board and paua shell accents. The fret-board is bordered top-to-bottom by film sprocket holes made of poplar. The position markers are semaphores in with holly. The semaphores spell out the word TANIS – the city were the Lost Ark was found. The heel cap has the back of the fertility goddess inlaid in gold mother of pear – copied from the scene where Harrison Ford stole it from the temple, just before the giant ball is released….. Lots of Easter eggs on this one.